On November 16, the “Paired Assistance for Rural Revitalization” Launching Ceremony of the Paired Assistance Program for Malipo by the China Public Diplomacy Association was held at Daping Middle School in Malipo County, Yunnan Province. Sponsored by China Public Diplomacy Association and China Foundation for Rural Development, supported by the Ministry of Foreign Affairs and the People’s Government of Malipo County, organized by Global Times Online and co-organized by Yum China, the “Donation Ceremony of Modern Kitchens to Malipo” was officially launched at the site. 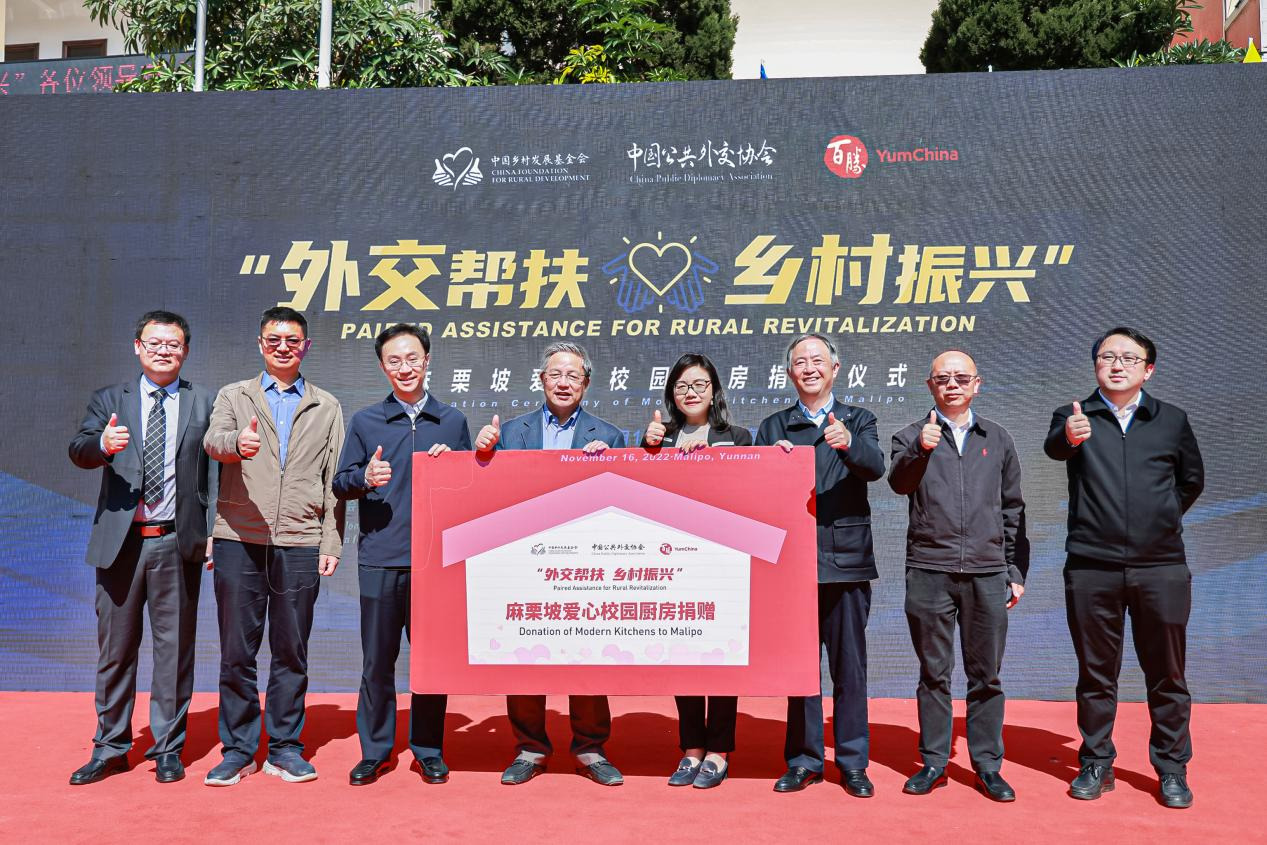 The year 2022 marks the 30th anniversary of the Foreign Ministry’s paired assistance to Malipo County, Wenshan Zhuang and Miao Autonomous Prefecture, Yunnan Province. Since 1992, a total of 230 million yuan has been invested in the poverty alleviation foundation. More than 700 projects in six categories, including food and clothing, education, health, training, integrated village development program and industrial support, have been implemented, effectively lifting Malipo out of poverty and accelerating the all-around rural revitalization.

Hu Zhengyue, Vice President of China Public Diplomacy Association, said in his speech, “The most arduous and onerous task of building a modern socialist country in an all-round way still lies in rural areas. The CPC Central Committee has comprehensively promoted the rural revitalization strategy, prioritized to rural education, and continued improving conditions for compulsory education. Today, we are holding a series of activities such as the “Donation Ceremony of Modern Kitchens to Malipo”, which is a concrete measure to mobilize the efforts of all sectors of society to implement the spirit advocated by the CPC Central Committee.”

Hu Jian, Deputy Director-General of the Information Department of the Ministry of Foreign Affairs, said, “The Chinese modernization is the modernization of a huge population, of common prosperity for all. No country has ever encountered such unprecedented difficulty and complexity on the way to modernization as China, with a population of 1.4 billionas a whole. We must maintain firm strategic resolve, pursue progress while ensuring stability, work hard to consolidate achievements in poverty alleviation and push forward the rural revitalization strategy.”

Chen Zhigang, Vice President of the China Foundation for Rural Development, pointed out, “Investing in children’s nutrition is investing in their future. Improvement in nutrition intake is instrumental in eradicating inter-generational poverty.” He also mentioned cooperation with Yum China in carrying out the “One Yuan Donation” program for 15 consecutive years to continuously improve the nutritional status of children in underdeveloped areas. The program has been supported by more than 130 million donors, with a total fundraising of more than 240 million yuan featuring “low threshold, convenient participation and transparent operation”.